Around the time that people retire, their language habits often change quite significantly. While they may have used the language of the country on a daily basis until then, with colleagues and co-workers, they may now spend more time in the home or with friends, and those often share the same native language. At the same time, the children have grown up and moved out, which also often will lead to an increase in the native language (particularly if the children never have learned this language very well – see here for more information).

Plus, of course, many of the phenomena that attriters experience – word finding difficulties, for example – are also common in elderly speakers, and may therefore become even stronger (although there is now quite a bit of research suggesting that being bilingual can slow down some of the problems that occur with cognitive aging, for example in this study).

Many elderly migrants in these circumstances feel that they are experiencing a process called ‘language reversion’: they begin to forget the second language, which has been their dominant language for years, and to ‘revert’ to their native language, which might have lain dormant or buried.

The spectre of ‘language reversion’ is, for some reason, particularly pervasive among Dutch speakers, and in particular in Australia. In this community, the language has often not been passed on to the children, and elderly migrants often dread the day when they will no longer be able to communicate with their own children, because they themselves will have lost their English and the children do not know Dutch.

It all goes back to the work of the late Michael Clyne, who investigated the languages of immigrants to Australia. In the 1970s, many of the Dutch migrants he spoke to reported experiencing ‘language reversion’, and he wrote about it in some of his work. He pursued the idea over the next three decades, testing and re-testing an increasingly aged population of Dutch speakers. Rather encouragingly, his work revealed that:

We should, however, keep one thing in mind: communication between ‘old’ and ‘young’ people is often fraught with difficulty and frustrations. Younger people tend to experience their older communication partners as ‘inattentitve’ or ‘nonlistening’ and generally feel that interactions with older communication 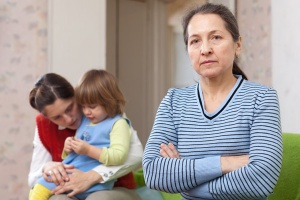 partners are less satisfying than those with same-age partners. Older people, on the other hand, often feel patronized and may feel that their younger interlocutors use overly simple language, a phenomenon typically referred to as elderspeak).

So, how much of the problems reported by elderly migrants and those in close contact with them can really be ascribed to ‘reversion’? If communicating with a parent or grandparent becomes difficult, this can be hard to accept – as can be one’s own role in it. It may be easier to just blame the convenient and ubiquitous myth of language reversion, since this relieves the participants of responsibility: it is ‘just’ a language problem.