Almost twenty years ago and more or less by coincidence, I became involved in a project gathering oral history interviews from German Jews. 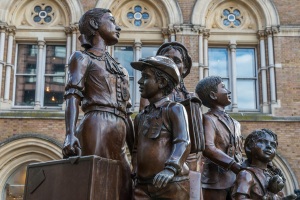 terror, about ignorance, intolerance and cruelty, but also about courage and generosity. Among the diversity of voices, characters and personalities, however, one thing began to stand out to me: the astonishing range in the degree of confidence and proficiency which people had retained in their mother tongue. In some cases, if I hadn’t known better, I would have sworn that they had never lived outside Germany for a day. In others, I would have been equally certain that they had learned German as a foreign language late in life.

It also intrigued me that there did not seem to be an obvious pattern that would explain which of them still spoke German perfectly and which of them didn’t. There seemed to be no clear relationship with immediately obvious factors, such as how old a person had been at the moment of emigration, the amount of use they made of German in their daily lives, whether they had migrated with their families or on their own, and so on.

At first, focussing on linguistic issues seemed callous to me. After all, many of the narrators had lost close family, had been exposed to horribly traumatic situations, had been humiliated and robbed of everything short of their own lives. Then it began to dawn on me that the reason why the language was so important was for precisely that reason: one would have thought that knowledge was the one thing that the Nazis could not have taken away from those who escaped.

For many, their native language was literally the only thing left which their parents had given them. On the other hand, it was also the language of the persecutors, and had therefore become tainted and despicable. One of the interviewees expresses what many of them felt: “When the war broke out, six months after my arrival in England, I vowed that I would never speak, write nor read German ever again.”

The investigation I conducted on these interviews eventually became my PhD thesis (and was published in 2002). The results confirmed my original impression: I could not find a link between the ‘obvious’ factors – how old someone had been when they left Germany, how much German they had spoken since, whether their partner was also German etc. – and the accuracy or complexity of their native language.

What did stand out very clearly was that the amount of persecution that individuals had suffered and the degree of erosion they had experienced in their first language were linked: people who had experienced some of the worst excesses, such as the pogrom of November 1938, were much less fluent and secure in using German than those wo had been able to escape at an earlier stage.